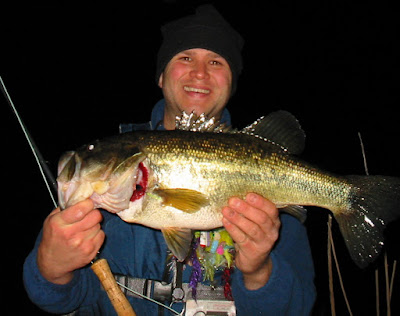 March 1, 1999 was a windy, nasty, cold day in Washington, DC. I had just parked in front of the Jefferson Memorial and was walking along the edge of the Tidal Basin where I planned on casting plastic grubs at the cold-numbed yellow perch that were sure to be feeding in the current flowing through the tide gates that control the water level in this man-made pond. Arriving at the gates, the wind was whipping against the incoming tide kicking up three-foot swells topped with whitecaps. My heart sank.

Armed with a light spinning rod, I flipped a small jig into the green water anyway and zipped up the collar of my winter coat against the cold spray the wind carried to my face. On the second cast I felt a faint tap telegraphed through the 8 lb. test. What followed was anything but what I’d expected. I set the hook and the rod doubled over. Whatever I’d just made contact with lunged for the bottom and decided to stay there. At first pulling back did little to persuade the fish to come toward me, but eventually I took back a little of my line and brought the fish toward the surface. The fish flashed green just under the surface and then the line snapped on a final run for deep water. A few seconds later I sat recovering from the shock and cold realizing that the fish had not been sporting the pattern of my favorite baseball team’s uniform as I thought it would... and I had just lost one of the biggest largemouth bass I’d ever seen!

An hour and a $50 parking ticket later, I had landed six bass – not one of which was under 3 lbs – including a feisty 21-inch smallmouth…

Since parking tickets are just a fact of life in “the District,” I left thinking, “Less than $10 a fish??? Totally worth it!” 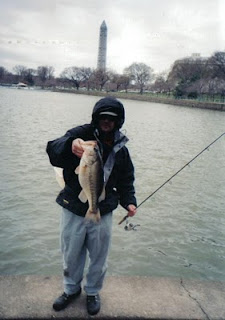 A nice pre-spawn DC largemouth
This early brush with pre-spawn largemouth on light spinning tackle led me to experiment with the fly rod in the early season up in DC. The tactics and flies I developed have come in handy since moving to Lake Murray Country.

I am a Yankee. Worse, I’m a New Yorker who grew up on that fish-shaped hunk of iceberg detritus known as Long Island. New York City and Manhattan Island to the west, and the tail of the fish with the Hamptons and Montauk to the east, I grew up somewhere in the middle and the Long Island of my youth seemed like nearly completely paved-over wall-to-wall suburbia. A half-hour drive north or south inevitably led to salt water, but fresh water fishing seemed rare and exotic to me in my youth. The bass in the few ponds I had access to were under amazing fishing pressure, so to my mind a foot-long fish was a trophy. Just the idea of throwing anything large enough to make a ripple near them was asking for them to spook.

So when I moved to Washington and realized that there were bass in the Potomac that responded to poppers, of all things, I began my education in real largemouth bass fishing.

My favorite pre-spawn bass fly in DC was the flash-tail clouser minnow. This fly was popular among smallmouth fly fishers in the upper Potomac who like to catch BIG FISH. Tied as a regular clouser minnow with a large hank of flashabou or other loose, finely-shredded tinsel for a tail, my take on this fly is that it is an early season fly rodder’s answer to the slow-rolled spinnerbait. Tied on a 2/0 hook in chartreuse and white or red and chartreuse with a long full tail that makes the total fly upwards of 8 inches long, this fly is easy to see in any water conditions. The similarity to a spinnerbait comes from the tinsel. Fine fibers push water and emit high frequency vibrations that mimic those produced by a wounded baitfish. Just like the blade of a spinnerbait, this fly calls the fish in with a subtle noise. Dredged along the bottom with long, slow strips punctuated with occasional twitches, this fly was deadly in about four feet of water just along the stone wall edges of the Tidal Basin, around wooden structure in creek mouths, and at other natural shallow ambush sites.

The Flash-tail Clouser
Another fly I highly recommend for this time of year is the Whiplash Crawfish. This fly is one I developed specifically for targeting big pre-season bass. Tied on a stout #2 wide-gap hook with an eyelash yarn body, rabbit fur claws, and silicone skirt material for antennas, this fly resembles a bass jig and is all motion in the water. The claws are tied so they separate and the fly is weighted in a way that makes the crayfish “stand up” with its claws spread in a defensive posture. Dragged along the bottom near shallow structure it imitates a crayfish slowly backing away from a hungry bass. One twitch of the line and it shoots upward suddenly as if it snapped backward trailing its claws that then spread out again pointing right at any interested fish as it slowly sinks back to the bottom. 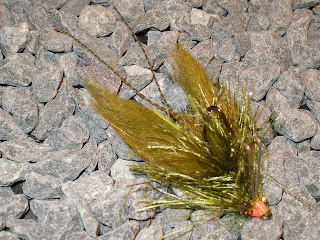 The Whiplash Crawfish
Throw it on a floating 7 or 8-weight line with a bb size split shot or two on a 9-foot leader. Cast the fly at shallow structure near a drop-off, then work it very slowly – counting about five seconds for each one-foot strip of line and pause between strips. Retrieve the fly along the edge or pull it over it into deeper water. Punctuate your retrieve with short tugs of the line occasionally. This can be the key to pulling the trigger on any fish that are following. Often the fish will hit this fly on the drop just a second or two after it hits the water if they’re home. Otherwise, watch the point where your line enters the water as you strip the fly back. Pull back hard with any twitch you see to drive the point home if it’s a bass. 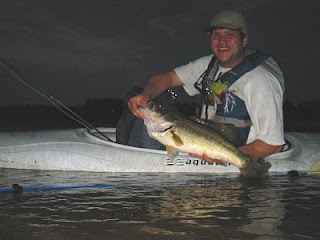 Lake Murray early spring largemouth
caught on a Whiplash Crawfish
Remember, bass fly fishing is not match-the-hatch miniscule dry fly trout fishing. Normal trout-sized minnow and crayfish imitations will look shrimpy to these fish. As a good friend once told me, if it were your dinner why would you eat a hamburger if you could have a steak? These fish are looking to catch and eat as much protein as possible as easily as possible, and slow-moving, large prey is what’s on their menu.

So get out there this spring and hit ‘em while they’re hungry. Largemouth fishing on the fly in the Carolinas can produce trophy size fish on rods that weigh only ounces. Remember though that these fish are busy getting ready to lay eggs that will produce future sport for all of us. Try to land them quickly and let them go gently taking only pictures and memories home with you.
Share | 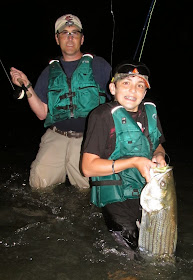 Treat your children or grandchildren to a safe, fun, educational river tour. With space for one adult and two children our drift boat allows anyone easy access to Columbia’s wild and scenic rivers!

As featured in the Free Times 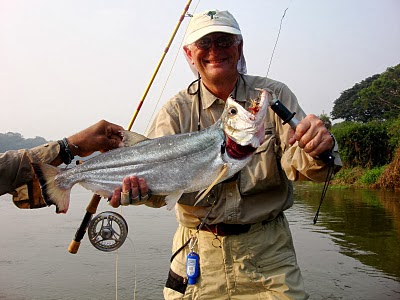 Payara "vampire fish" caught on Frank's wobbling whiplash worm in a tributaty to the Amazon River in Bolivia.